Algerian President  Abdelaziz Bouteflika recently announced that he would be running for a fifth term. He did not make the announcement personally. In fact, he has not spoken a word in public for the last five years. 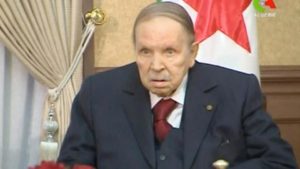 He spends most of his time in Switzerland, being treated for an unknown illness. His only public appearances are in a wheelchair. At these times, with his vacant eyes, he looks more dead than alive.

Algeria has lost half of its oil revenue while young people have no jobs and no prospects for a better future. Bouteflika’s corrupt administration has recently erected a magnificent new mosque in Algiers. This may have been the last straw. 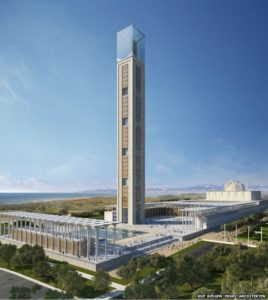 Street protests exploded and overflowed.  The police were not sure whether they wanted to fight the protestors or join them.  Journalists were arrested. A female broadcaster was interrupted and contradicted while she was on the air.  The protests have since spread to Tunis and to Marseilles which have large Algerian populations.

Bouteflika then chose to leave (or maybe it was chosen for him.)  An interim government is in place until elections can be held. But things are breaking down. Everyone and everything in Bouteflika’s government is suspect. The people are tired of the system of cronyism and are demanding a clean slate, real elections  and the rule of law. Most recently, the demand is that new elections should not be held until present governmental system is eradicated. They have no faith in interim President Abdelkader Bensaleh. 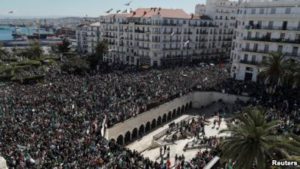 What’s next? There seems to be no promising alternative. The opposition is weak and divided. And the money to implement solutions is simply not there. Many are afraid that Algeria could once again descend into violence as it did in the 1990’s when the country went through a terrible civil war. 200,000 people died and election results were overturned.

The omnipresent Army is the sole source of power and will  oversee the new elections if they are held.  But the Army has its vested interests to protect and will probably continue to run the country no matter what the elections may bring

Editor’s note: Here is a video showing the mosque which is now nearing completion. It is a very remarkable building and worth enjoying.

What a terrible time for the people of Algiers. I had not heard about this, Simone. The people are facing very difficult options. Thank you for writing about this situation.

Wow, I had no idea this was happening. What do you think the end result will be Simone?

You’re right, it is a very sad situation.

Hi Simone, do you think there are comparisons to this mosque and Trump’s wall?

Not quite!The wall is a symbol of hate and exclusion and is more objectionable

Very true, although it is hard to overlook the similarities that both are a waste of government money that could be used to improve the quality of life for average citizens.

No t quite, The wall is a symbol of hate and exclusion and is therefore more objectionable

Do you see Algeria becoming more of a military dictatorship in the wake of these events?

My grandmother was Algerian, my heart aches for her homeland. I hope things get better soon

CNN reported that Algerian President Abdelaziz Bouteflika has announced that he will not seek a fifth term and no date has been set for the postponed elections. It seems that all of the protests have convinced him that change must happen and he plans to bring Algeria into “a new era.” I’m sure that a lot of Algerians are celebrating!

This is wild. You would think with something this massive going on the American media would cover it more! IT feels like a story that would be covered in the 80s or 90s but today they are only interested in the latest political controversy or celebrity news.

The French media covered it in depth. They are very good about reporting on
Africa

Algerians are demanding that key regime figures be removed and an overhaul of the country’s political system before having an election for a new president. They forced the cancellation of the July election by refusing to accept the candidates offered. A new date for an election hasn’t been announced yet and tens of thousands of demonstrators continue to rally.

Oh my! I feel like I’m missing out a lot of happenings around the world. I had to go check up the current news about Algeria today and honestly, I do hope things turn for the better right now. The past officials definitely did not do anything meaningful. It’s actually a good thing that Abdulaziz is no longer coming back for another term. That could be a new fight from the people as they totally deserve better.

Exactly. The people are tired of the system of cronyism and are demanding a clean slate, real elections and the rule of law. I was there a few months ago and to say that they totally need these is not far from the truth. Their economy is crumbling by the minute and the condition of living is not in any way favorable to a lot of them. A whole new era is just what they need right now and we are positive this would happen.

Now when you have the military in power, it’s not always easy pulling out of the regime as they are quite powerful and likely holds absolute power. Clearing off the governmental system is a good start for them to avoid the new president getting corrupted by the already corrupt people he meets there. They have no faith in interim President Abdelkader Bensaleh.

For me, I think the end result will not be that promising at all because a lot of things they are kicking against as a people would not work in a twinkle of an eye. It’s going to be a gradual thing and protesting this heavy is beginning to sound in a different way to me

I agree with you.

wpDiscuz
22
0
Would love your thoughts, please comment.x
()
x
| Reply
You are going to send email to
Move Comment