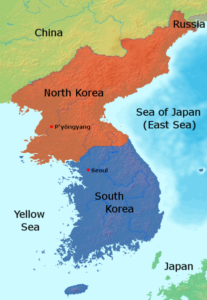 Kim Jong un, North Korea’s hereditary Supreme Leader, son and grandson of North Korean dictators is well known for treachery and double dealing. His human rights record is appalling. Last year he conducted a series of nuclear and ballistic missile tests that brought him in very close range of being able to attack Japanese and American cities.

On February 13 Kim had his half-brother Kim Jung nam murdered at the Kuala Lumpur Airport. Two women approached him as he was about to board a plane. They smeared nerve agent on his face, having first removed from his backpack the antidote he carried against just such an attack.

Then one fine day we rub our eyes and witness a wondrous sight…A most unusual “pas de deux” is unfolding in front of us.

Kim Jong un and South Korean President Moon Jae are holding hands and they are stepping across the symbolic threshold that has separated the two Koreas for more than 50 years. This little dance is repeated by the press “corps de ballet” running and prancing behind them. Can you not hear them sing Here We go ‘round the Mulberry Bush?

Is there a conjunction of interests here? Or is all this a sinister plot to take advantage of our President’s political inexperience?

And so we cannot help wondering, why is Kim suddenly making “nice”?  Why has he released the three Americans he was holding? Kim continues to be shrouded in a fog of mystery which makes guessing very difficult, and he has profited from the aura of mystery surrounding him.  Because of this, every overture seems momentous even if he is in fact giving up very little.

His country is economically very backward and its citizens are starving. How long can North Korea survive as a pariah?  And so, Kim is probably ready to make an entrance into the modern world. As a start the two Koreas have synchronized their clocks so that they are now living in the same time zone.

We can also be sure that Kim will not ever give up his nuclear arsenal because it is his only protection.

We shall have to wait until June 12 when Trump and Kim will be meeting in Singapore to see the rest of the performance. Much self-applause is sure to be in evidence.

Unless of course Kim gets cold feet and is thinking about sitting out the next dance.

There is zero chance he will give up his nuclear arsenal. Why should he? It’s working. The Mouse that Roared.

He knows how to play Trump like a fiddle.

Who knows, this may be the most Machiavellian of all gambits. Bolton wants him to cancel so he can advocate military action. “See, we tried.”

In June, Trump visited Kim, being the first sitting US president to ever enter North Korea. It doesn’t seem that anything has come of the visit as Kim is still continuing nuclear tests. I think that our president is just using his visits as a way to promote himself for the upcoming election. Everything is just about him and doesn’t have anything to do with improving conditions in our country or the world.

Trump never accomplishes anything. He just struts and postures. And it is not clear to me whether Kim intended to accomplish anything either.