The task of making a huge, alien land a friendly and cozy one was never easy. Colonialism mistakenly assumes that a conquered territory has no civilization of its own and has to have one imposed on it. In this scenario, the governing and the governed actors each play their assigned roles in a well-oiled machine. However, situations evolve and conflict arises.

When I was in grade school in Beirut we had a teacher who regularly read us stories from The Jungle Book by Rudyard Kipling. Through these wonderful stories, I met Mowgli, the naked feral child who lives with a wolf pack.

Rudyard Kipling was born and lived in India which was the setting for his novels As a child I, of course, never picked up on his paternalistic and essentially racist view of that extraordinary country. The wisdom of those days was that “the white man knows best.” 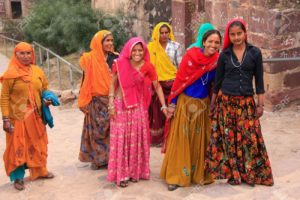 Some considered Kipling to be second-rate as a novelist. George Orwell wrote that “five generations of enlightened people” despised Kipling as “morally insensitive and aesthetically disgusting.” Oscar Wilde said his writing showed “superb flashes of vulgarity.” 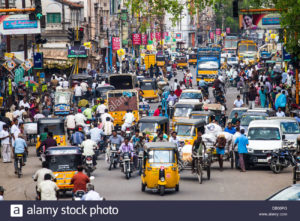 England’s role and rule in India was always a murky, ambitious and ambivalent one. It started in the 18th century with the East India Trading Co and gradually extended into wars of conquest through which vast territories were acquired until India became “The Jewel in the Crown” of the largest empire in the world. From 1858 until 1947, the British Raj (or rule) controlled most of the sub-continent.

And then, change happened. Less-educated British people arrived and clashed with highly-educated Indians who had been brilliantly schooled by the British. This contrast is depicted in E.M.Forster’s A Passage to India where characters no longer know what their assigned roles are and totally misunderstand and misjudge each other.

In such a climate it is not hard to conjure up aggression. The British in their snobbishness rapidly retreated to their exclusive and segregated country clubs and Indian doctors and other intellectuals were left in a sort of no man’s land, estranged from their own countrymen. 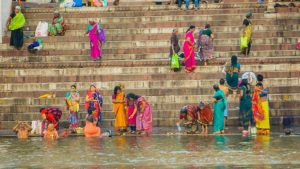 Crowd of pilgrims at ghats on River Ganges

Today, Indian local customs and values culminate in the cult of the ancient river Ganges which is considered sacred and personified by the goddess Ganga. This is where people come to wash off their sins and be purified in a frenzy of devotion. They do this in water that has been highly contaminated by humans and animals washing, bathing and eliminating as well as toxic waste and untreated sewage. Still, they come.

India is no longer occupied by conquerors, but it is weighed down by ancient superstitions and apathy in the face of outdated beliefs and customs.

It’s interesting to me that for centuries Britain sought to dominate the world through colonization, but today they are seeking to draw a wall around themselves and cut themselves off from the rest of the world. It’s almost as if they feel that if they can’t rule the world then they want nothing to do with it.

Yes. Quite an about face

Very cool, I do always love hearing about your early personal history =) Such a life!

And yes, I agree with Alex…they’re almost going in exactly the opposite direction. I suppose America did the same after WWI, we’re always see-sawing one way or the other. Engagement or isolation and back again.

Thanks for another informative article. I’m always compelled to find out more after reading your posts and this one has me searching the internet for more about colonialism. I was surprised to find that although generally considered to be a thing of the past, there are still about 2 million people in 16 territories living under virtual colonial rule.

Even though the Ganges river is considered to be one of the world’s most polluted body of water, the Hindus believe that the holiness of the water keeps them safe from any ill effects. But the fact is that thousands are afflicted with diarrhea, cholera, dysentery, and typhoid each year. Politicians aren’t living up to their pledges to build more treatment plants so there isn’t much chance of things changing anytime soon.

It is hard to fight superstition!

Interesting and informative as always

I read A Passage to India in school and I enjoyed it very much. It follows three English newcomers to India and addresses the issues of privilege and racial prejudice. I highly recommend this novel to anyone looking for an insight into another culture and time

Orwell said that “most of Kipling’s verse is so horribly vulgar that it gives one the same sensation as one gets from watching a third-rate music-hall performer” and that “even with his best passages one has the same sense of being seduced by something spurious, and yet unquestionably seduced. “
I’d say he was not a big fan of Kipling.

I’d say you are quite right!

India is the most absorbing and fascinating place I have ever been. The best description I have is it is like traveling to another planet. I can see why the British were captivated. It is also a commentary on how a handful of foreigners through fearlessness and the understanding of human nature, working with local rulers, could take control of South Asia from Kashmir and Nepal to Sri Lanka.
I recommend reading about Robert Clive (1725-1774) – Lord Clive “Clive of India.”

I have not been to India nor did I really want to go there. I was slightly repelled by what I was reading and watching on TV. It seemed cruel.

It is different now. Independence brought different problems. Thank you for your recommendation about “Clive of India.”

I have been to India twice, and I must say that as wonderful and lovely the country is, it is full of so many superstitions. Most of which hurts their lives and relationships. But what can they do? They tie everything around one god or the other. So instead of living for themselves and staying happy, they have so many gods to please. India truly needs a revolution, and this time, it is revolution of the mind.

I have never been to India perhaps it is because I don’t
like superstition.

You are very correct. But I’m sure those things are getting reduced among them. As knowledge advance by the day, most of them are beginning to see that those superstitions are nothing but myths.

Many people have commented on the persistence of superstitions.They must have a strong hold
on the people of India.

this is yet another interesting read. Searching about India after reading this, I became open to more of their superstitious living. Hmm.. I must say that I don’t think it is a country I would love to visit anytime soon.

Superstition is often replaced by knowledge but sometimes it just doesn’t happen.

I really want to believe that their education and improved civilization would help reduce their superstitious ties. If you look into all these things they worry about, you’ll realize it doesn’t really offer them much but because they have greatly been deep-rooted in their beliefs and practices, it’s a bit difficult for them to pull out. Funny how even some good Christians are still deeply affected by these superstitions. Like Dylan said, “India truly needs a revolution, and this time, it is revolution of the mind”.

People do cling to them because the truth is often not as pretty.