As women continue to take their equal role in the world, some who have made the most dramatic strides have been cut down by assassins. These woman have had the audacity to aspire to bigger roles, to step onto the world stage, to lead political parties, to govern countries. Their reward for this effort, in several important cases, was assassination. 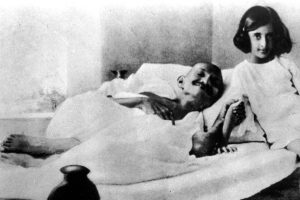 Indira Gandhi with the Mahatma. (not her father)

Indira Gandhi was born in India in 1917, the daughter of Prime Minister Jawaahaaral Nehru. She was active in the National Congress Party and served as Prime Minister of India twice, from 1966 to 1977  and from  1980 to 1984.

Gandhi was assassinated by two of her bodyguards in retaliation for a military operation meant to remove armed Sikh separatists from the Golden Temple in India. 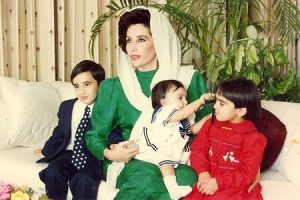 Benazir Bhutto was from an aristocratic Pakistani family. She served as Prime Minister  of Pakistan from 1988 to 1990 and again from 1993  to 1996, she studied at Harvard and Oxford.

She was killed when leaving a rally on December 27, 2007. The killer was a 16 year old suicide bomber who was acting on the orders of the Pakistan Taliban. 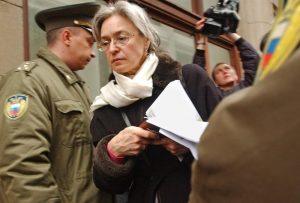 Anna Politovskaya was a Russian-American journalist who reported on violence in Chechnya . She was also a political activist and a critic of Vladimir Putin. She wrote a book titled “Putin’s Russia, Life in a Failing Democracy.”

She was killed in the elevator of her Moscow Apartment, it is thought on orders from Putin.

Ironically her murder drew attention to her activities and put them in a spotlight.

So, yes women are now important enough to be assassinated. They have achieved this dubious status of equality with men.

It is risky to be a person with political power. Dubious equality indeed.