Once upon a time not so long ago, in a land not so far away there lived a monarch who reigned over the Austro-Hungarian Empire. His name was Franz Josef and he ruled for 68 years starting in 1848. Like many 19th Century monarchies, his empire fell into decline and during his reign, it lost wars, influence and territory. Still, Franz Joseph survived his tragedies and died peacefully in his own bed in 1916.

The Fates placed a malediction on Franz Josef’s family sowing havoc and mayhem.  Some of his siblings and children died in infancy although that was not unusual before the twentieth century.  His brother Karl Ludwig succumbed to an infection on his way to a pilgrimage. His son and heir Rudolf, unhappily married, fell in love with the very young Baroness Mary Vetera. In the winter of 1889 they rode to a hunting lodge in Mayerling  in the Vienna woods and committed a double suicide. This story became the theme of many books and films. I saw the one released in the thirties starring Charles Boyer and a 17-year old Danielle Darrieux.  To me it was the essence of a romantic and doomed love affair. A tear jerker but a very good one. 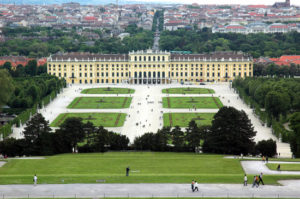 Franz Joseph castle (which you can still visit
today)

Maximillian, the younger brother of Franz Josef became the Emperor of Mexico in 1864 with the backing of Napoleon III of France and of Mexican conservatives. Three years later during a rebellion, he was captured and executed by Benito Juarez. If you are wondering  what the devil he was doing so far away from home, you must realize that in those days the royals were criss-crossing the globe trying to create new dynasties in other lands.

In 1854 Franz Josef  married  the 16-year old Elizabeth of Bavaria.  Sisi, as she was known, became very unhappy with life in the court. One cannot help comparing her with Princess Diana who was also quickly disenchanted with her royal life.

Sisi was very beautiful and devoted a lot of time to fashion. It was said that her hairstyle alone took 2 hours to achieve.  She also had a serious side and studied English, French and ancient Greek.  She was very popular with her people and quickly became an icon.  Sisi traveled a lot and spent little time in the family’s castle in Vienna. In 1898 while staying in Geneva she was stabbed to death by an anarchist. He explained that he was looking for a royal person to kill and stumbled upon her!

The last and best known tragedy to strike Franz Joseph befell his nephew Franz Ferdinand who was heir to the throne.  On June 28, 1914 in Sarajevo, capital of  Bosnia, Franz Ferdinand and his wife were ambushed and assassinated by Gavrilo Princip, member of a separatist group which  was fighting for the independence of his country from the Austro-Hungarian Empire. The chain reaction that resulted is well known. In an avalanche effect, country after country fell into a war which none of them understood.  Everyone thought this jolly little war would be finished by Christmas when they could all go home. But World War I persisted for over 4 terrible years and forever marred the face of the 20th Century,  opening the door to decades of bloodshed and terror. This year, we mark the 100th anniversary of its beginning.

When Franz Joseph died in 1916, though it was not widely recognized at the time, the era of the benevolent  imperials had ended.

(your comments are always sincerely appreciated)

You create such a strong image of history with your words. I am going to read your post several times in order to fully remember the details. Thank you!!

Posting a comment that came in through another source…a wise and well read historian.

Well done! If the Austro-Hungarian Empire had survived, Europe might be a much better place. Sort of a democratic federal system……

The assassination of Franz Joseph shows that what happens to one person can have a huge impact on all of history thereafter.

Hi, I loved your writing about this tragic story. We don’t often study the Astro-Hungarian Empire, but those events in Central Europe probably affected all our families in some way.

I like the drawing of the young Franz Joseph. I can only think of seeing seeing the grizzled, old Emperor with a bushy beard. The young man looks so fresh… and clueless! I suppose that was what ate at anarchists — and is reflected in all movements against power, privilege, and unequal outcomes.

See this amazing account about the life of “Sisi” Empress Elizabeth of Austria
http://en.wikipedia.org/wiki/Empress_Elisabeth_of_Austria

A very interesting read, but I wonder if your comment of the “The Last European Emperor” is being spoken too soon.

Given what Putin is doing in the Ukraine, it seems he’d like to establish himself as one of the great European monarchs.

Given our spineless reaction to events in Ukraine, this is not a far-fetched hypothesis.

I am surprised nobody corrected me on this. Kaiser Wilhelm of Prussia was actually “the last emperor” He died in 1918 two years after Franz Josef.
Simone