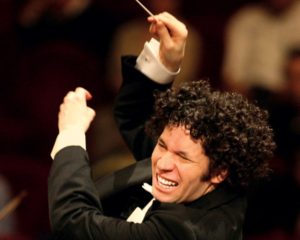 Music is a contact sport. An electric current passes through the conductor to the orchestra and through the orchestra to the audience. Audiences clap or shout “Bravo” (unless they boo and hiss.) This response in turn rebounds back to the performers. Gutsavo Dudamel understands this phenomenon extremely well and maximizes the connection.

Dudamel is the conductor and music director of the Orquestra Sinfonica Simon Bolivar and (by the way) of the Los Angeles Symphony Orchestra. He was born in Venezuela in 1981. His mother was a singer and his father a trombonist. He played violin but showed an early aptitude for conducting.

Watching him conduct, hopping, jumping, dancing, with curls bouncing, you are struck by his enthusiasm, immense energy and sheer joy at sharing his passion.
Beethoven’s 9th Symphony and its Ode to Joy is the perfect vehicle for a man who throws himself into the music with such abandon.

Dudamel’s introduction to classical music was through a program called El Sistema founded by Jose Antonio Abreu in Venezuela, which features total immersion of children in ensemble music – a hundred people working as one.

Dudamel believes that music can transform lives. He has become a champion of the arts for young people around the world. He is also committed to exposing audiences to new and nontraditional music. In 2012 he set up the Gustavo Dudamel Foundation to promote access to music as a fundamental human right.

In 2007, Dudamel founded YOLA, the Youth Orchestra of Los Angeles, which provides access to music to underserved communities. He then worked closely with architect Frank Gehry who has designed a new facility for YOLA. It’s a glass fronted box with a glass pop-up roof which allows sunlight to stream into the 260 seat hall below. The facility will be located in Inglewood, California with construction expected to begin in 2019. 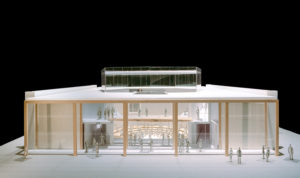 Gustavo Dudamel has been criticized for his continued ties to Venezuela. This is a country suffering from a horrific economic and social crisis most of it engineered by former President Hugo Chavez and his successor, Nicolas Maduro. These regimes have insisted on adhering to authoritarianism and to outdated communist values. As a result most of the population lives in poverty.

Dudamel performed at the Hugo Chavez funeral, but otherwise tried to remain uninvolved with the woes of his country of birth. Then in 2017, a group of musicians was protesting Chavez rule and during an ensuing riot, an 18 year-old  viola player and El Sistema pupil Amando Canizcle, was killed.

Dudamel was moved and in a New York Times article, he condemned the violence and denounced the Venezuelan Government’s planned Constitutional Assembly as outside the law.

It is not easy to be involved in too many battles and every person must decide how and where to devote their energy so they can participate in what matters most to them.

Editor’s note: Below is an exciting and inspiring clip of Dudamel conducting a Venezuelan youth orchestra through some classic mambos. The whole scene is a feast of joy. It will make you happy for sure.

I loved your Dudamel blog – I was in Venezuela during the Sistema and Chavez and have heard and seen Dudamel in the Greek, a great story. All the very best in this new year. Sincerely
Ladina

I love this quote – “music as a fundamental human right.”

It certainly can be. Even in the poorest places, and the most desperate, people find ways to make music. And how does a teacher control? Stop all the noise, demand silence.

The video clip is also wonderful and had me tapping my feet =) It’s almost exhausting by the end of so much energy!

I attended the Walt Disney Concert Hall when Herbie Hancock performed and amazing version of Gershwin’s Rhapsody in Blue with Gustavo Dudamel conducting the Los Angeles Philharmonic. It was an unforgettable night of celebration of George Gershwin’s music.

On January 22, another accomplishment was achieved by Gustavo; he was inducted into the Hollywood Walk of Fame. Just another example of how much he is loved and respected for the work he has done. Congratulation to the most distinguished conductor of our day

Agreed. Gustavo understands all the connections that take place between the conductor, performer and audience. This just shows why he’s so great at what he does and always receives a standing ovation at the end. I really enjoyed watching him when I was younger.

Gustavo was quite good with violin but I guess conducting was calling him louder. He answered it and became something wonderful the world could reckon with. His videos are everywhere and I must say that people who wanted to understand conducting better or just needed a guide, always turned to these resources to show just how good they are.

This guy is just so great at the art of conducting. He brings it to life, making it look like it’s from the heart and he connects well with the audience such that you’ll find yourself intrigued by his abilities. Not to mention that he leads the performers well to deliver the best. He’s truly a legend.

He’s good, no doubt. He’s got a good heart too as he’s always on the lookout for what would help people who suffer around him. I’m scouring the internet daily to see if he has any tour of sort and will be in my country for a performance. I really enjoy watching him burst with energy and make almost the whole crowd hold their breath. I totally look forward to watching a live performance of him.