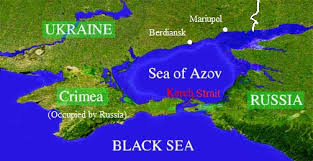 Last month, Russian forces seized and shot at three Ukrainian vessels attempting to cross through the Kerch Strait, a narrow passage between the Black Sea and the Sea of Azov. Six sailors were injured.
The Russians then boarded two warships and a tugboat, detaining more sailors and completely blocking the Strait. Some of the seized Ukrainian sailors have now been flown to Moscow.

Now two Ukrainian Azov Sea ports, Berdyansk and Mariupol are under complete control by Russia and others are forbidden to enter the area. 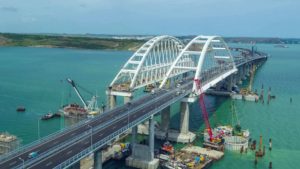 Vladimir Putin very recently inaugurated a new twelve-mile bridge over the Strait connecting Crimea to mainland Russia. Russia’s aim is to completely control the land and water around Crimea, a highly populated area.

President Poroshenko of Ukraine, accused of corruption and running for reelection, has reacted by threatening total war on Russia and declaring martial law. So now we have two snarling dogs glaring at each other across the Azov Sea. 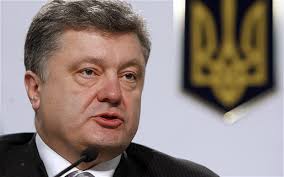 Ukraine would like NATO to intervene which it does not seem eager to do even though Ukraine had previously given up its nuclear arms in exchange for a promise of Western protection.

So why is Putin flexing his muscles now? For one thing the Russo-Ukrainian conflict has never been as dormant as the West would like to believe. Russia is backing a separatist revolt in southeastern Ukraine where more than 10,000 people have already been killed. The region of Donbass is controlled by pro-Russian secessionists and is in a constant state of conflict. The Western World has been focused on other important matters.

Why is the conflict now escalating? One explanation is that Putin’s popularity at home is low. He has just instituted a retirement reform which would raise the age at which people are eligible for pensions. At the same time, the Orthodox Ukrainian Church wants autonomy from the Russian Church. There is discontent in Georgia and in Armenia.

According to President Poroshenko, Putin’s nostalgia for the Greater Russia which existed both in the Czarist Empire and in the Soviet Union has never abated. This greater Russia cannot exist without Ukraine .”He sees us as his Colony” says Poroshenko. And now Ukraine would like to turn its back on Russia. This is intolerable to Putin.

It could also be that the Russian President is testing the resolve of the new American President who does not seem to be particularly interested in Ukraine or in intervention. The European Union needs Russian gas so it will not want to intercede.

I believe the carefully plotting Vladimir Putin has decided to seize this opportunity and to engage in a little adventure while putting all the blame on Ukraine.

Often it’s easier to understand complex matters when you explain, clearly and succinctly.

United Nation’s International Tribunal for the Law of the Sea (ITLOS) recently ordered Russia to release the 24 Ukraine sailors. It is still allowing Russia to go ahead with criminal proceedings against the sailors who face up to six years in prison if found guilty of crossing illegally into Russian waters. I hope that Russia complies with the order which might be a sign that they are ready to end the conflict with Ukraine

How do you see the current president, Volodymyr Zelensky, dealing with Putin? He’s proposed having a meeting with Putin and including Trump, British Prime Minister Theresa May, German Chancellor Angela Merkel & French President Emmanuel Macron. Will Russia agree to the peace talk?

I do not think it is a good idea. Far too many people And Putin is not usually very truthful.

When I heard that Putin instituted a retirement reform which would raise the age at which people are eligible for pensions, I was not really sure it was entirely a good idea. Well, if it’s favorable to the masses, then that’s fine. It’s not my country so I may not be able to judge from a distance.

Vladimir Putin likes to be in control.

Hmmm. The Orthodox Ukrainian Church wants autonomy from the Russian Church? This just gets interesting. As there is discontent in Georgia and in Armenia, I guess they should just let everyone go. Each to his own tent. Maybe this will reduce been on each other’s neck.

Vladimir Putin likes to be in control

Lol. Aptly put. They are two snarling dogs glaring at each other across the Azov Sea. This conflict just doesn’t look like there’s an end yet. I think majorly because those who can help work things out do not want to get so involved as they’re likely getting something from the other. It’s just so weird!