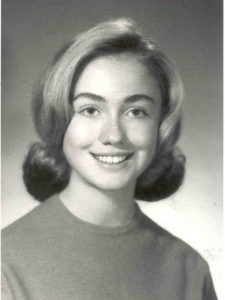 And now we come to our most intelligent, forceful, complex and contradictory First Lady of all: Hillary Clinton.

My introduction to her was an interview she and Bill gave on 60 Minutes during their first run for the presidency. And I do mean “their” because she immediately struck me as an equal partner to the future President. It was during that campaign that we first heard the famous remark that she was not the kind of wife who stayed home and baked cookies. And Bill supported her by declaring that the American public would be getting a “two for one.”

I was very pleased with this open expression of feminism. I thought it was time for women in politics to openly assert themselves. As First Lady, Hillary had her own office in the West Wing of the White House. (Rosalyn Carter’s office was in the East Wing).

Unfortunately for Hillary, within days of becoming First Lady she was named by Bill as Head of the Task Force on Health Care Reform. This created a controversy since she was not an elected official. The task also proved to be far too complex and it failed. The problem has not been solved to this day and we are in the unenviable position of being the only advanced democracy in the world without effective universal health care insurance. Hillary continued to champion various health initiatives such as children’s health insurance, gender equality in medical issues and veterans’ illnesses.

On her many trips abroad Hillary denounced domestic violence and “honor killing.” Hillary was a great advocate for women and children’s rights and as much an activist as Eleanor Roosevelt whom she admired greatly.

Hillary Clinton’s independent spirit ultimately and very unfortunately clashed with her loyalty and support of her husband, and Bill Clinton let her down badly by having multiple and overt extramarital affairs. His conduct eventually led to his impeachment.

In an interview in 1998 Hillary referred to the Lewinski/Impeachment events as a part of “this vast right-wing conspiracy that has been conspiring against my husband since the day he announced for President.” This statement had repercussions on her credibility. Whether she really believed this or was being protective is not clear.

When it turned out that Bill had lied she continued to play the role of loyal wife. Instead of admitting to being victimized and wounded, instead of divorcing herself from the whole sordid affair, she meekly accompanied her husband on a vacation to Martha’s Vineyard.

I will stop here although much more could be said about Hillary. I will only add that I believe she would have been a good and effective President had she been elected.

Thank you for a comprehensive review of Hilary Clinton’s history of being a First Lady.

I agree that Hillary would have been an effective president. Things would be much different right now than how they are because of the current clown in the office. I’m glad there are several female candidates for the upcoming election including, Tulsi Gabbard, Elizabeth Warren, and Amy Klobuchar. I’m looking forward to seeing Trump’s reaction when he is defeated by a female.

I completely agree that Hillary would have been a good president. How much different would things be now if she would have beaten Trump in the election? I think that it’s pretty clear that there were illegal behind-the-scene acts committed to stop her from winning and I hope that those responsible will eventually be charged an impeached.

We were cheater that year. Instead of having our first woman President, who would have governed effectively, we got an imbecile for a leader, a man who turned out to be as evil as he is ugly.

I am still in mourning.

Hilary is truly not the kind of person who you’ll find at home cooking or baking cookies. She’s independent and bold and the strength she put in to contest for this last election was incredible. I love her courage and really wished she made it to the seat. We would have been in a better place by now no doubt.

I am still devastated by what happened.

She was the woman president we would have embraced. I still don’t understand what happened. She was good, had a lot of supporters but on the election day the whole thing became something else. I hope we don’t experience that in this next one still featuring women. We have had enough comedy rule so far.