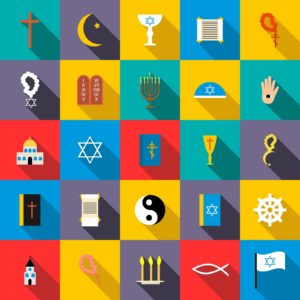 Assia Bibi, a Christian woman living in Pakistan, was sentenced to death in Pakistan for blasphemy for having participated in a protest march.

Even though she was exonerated by the Supreme Court, she must now flee if she wants to avoid being attacked by an angry mob of people who fully intend to murder her. I believe their intent is to hang her. 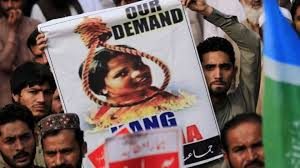 Did this happen centuries ago? No. This is going on right now and the state of Pakistan will not protect her.

In Saudi Arabia Raif Badawi is in prison for the blasphemy of being an atheist.

In Indonesia, Jakarta’s Governor faces a two-year prison sentence for saying that the Quran does not mandate that voters support any Muslim over any non-Muslim.

In the US the activist Desiree Farooq was tried for “disrupting Congress” and faced a term of up to a year in jail. Her principal crime was that she laughed at something said by a Senator during the confirmation hearing for now former Attorney-General Jeff Sessions. The charges were subsequently dropped by the Department of Justice, which had brought them.

So what exactly is blasphemy? According to Wikipedia, it is: “The act of insulting or showing contempt for or lack of reverence toward a deity or something sacred or inviolable.”
The Bible does not explicitly mention blasphemy.
In fact there is no Hebrew word for it. In Exodus it only says: “You shall not revile God or curse a ruler of your people.” But the Bible does warn against taking the Lord’s name in vain. Moses asks God “what is your name?” and God replies :”I am who I am” (a nice cryptic answer).

The Bible does not say that one who blasphemes against the Holy Spirit is guilty of an unpardonable sin.

Let us just say that people like to group things in threes: The three little pigs, the three Stooges, three blind mice, three men in a tub…..

I suspect that at the root of all these injunctions is the fierce determination of the religious authorities to establish rules that will keep them firmly in control and not let anything undermine their authority. Dissent must be prevented.

Blasphemy came late to Islam and was imported there by the British Empire. In the Islamic religion, blasphemy is an impious utterance against God or the Prophet.
The Quran admonishes against blasphemy but does not specify a worldly punishment for the offense.
Closely related to blasphemy are the concepts of heresy or idolatry which centuries ago were punishable by torture and death.

As the Western world is becoming more secular such ideas are slowly fading. In the United States the First Amendment prevents Government from making laws about religion and speech and gives citizens freedom to exercise and express their religious beliefs.

In places where religion still pervades everyday life the concept of blasphemy is alive and well.

The human species certainly has a gap to bridge before it becomes the species it could be. This whole concept of blasphemy is so convenient for those in power.

After spending eight years in jail, Assia Bibi has finally been released. Extremist groups in Pakistan against her release, rioted and demanded that she be hanged. The Pakistani government ended the protests by agreeing to forbid Bibi from leaving the country. Keep in mind that the reason she was jailed was for drinking water from the same glass as Muslim laborers because Muslims and non-Muslims cannot share utensils.

Violent mobs stormed the streets in protest against Bibi leaving the country and authorities bowed to their pressure. It’s now believed that she has been able to leave the country and the religious hard-liners are outraged. They will only be happy if she is executed. It’s unbelievable to me that this is going on.

Bibi’s story fascinates me till today. I mean, why would someone want to be hanged for something as trivial as that? I feel we are now hiding under religion and doing cruel things to one another while claiming we are doing it for the religion. Remember, religion is made for man and not man for religion. We shouldn’t blindfold ourselves and expect that others will swallow our religious lifestyle.

Hmmm. It’s just so unbelievable that something of this sort is happening in our time. We are too knowledgeable today to be involved in such. There’s no gain so why do people do it in the first place.

OMG! Such a thing is happening today? This sounds like something from the Stone Age. In fact, I thought those people had regard for people’s lives to an extent. It’s just heartbreaking that people will still resort to hanging or killing others simply because they did something against their religion. Everyone should just stick to their beliefs and not drag anyone into it.

True. As the Western world is becoming more secular such ideas are slowly fading. It’s better as the First Amendment now prevents the Government from making laws about religion and speech and give us the freedom to exercise and express our religious beliefs. This makes more sense as there would have been issues along the line if the government was involved in religious matters.

There should always be a separation between the state and religion.

I wonder when people started talking about blasphemy and making it a serious thing that involves going after people who they think are doing blasphemous things. It’s strange to think that with the extent of civilization and exposure we have today, people still get to drag others over such.