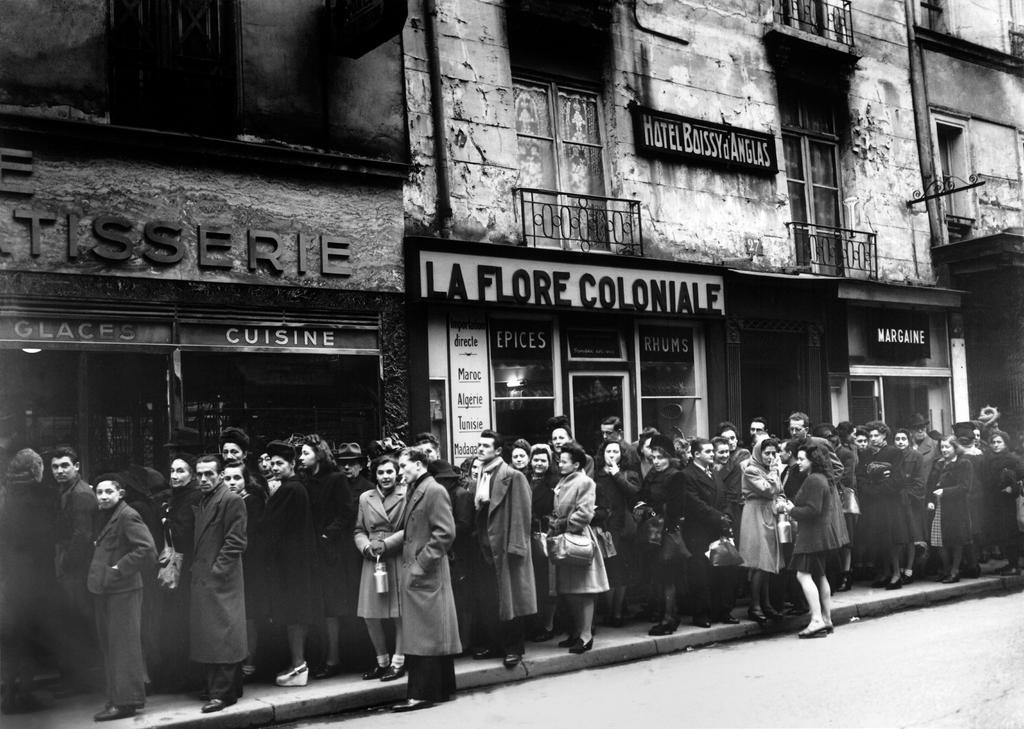 Paris, 1945. Waiting for a bakery to open during a period of rationing

Just after the Second World War, my husband David and I lived in France. Food was scare and a system of rationing was put in place. People had ration cards and distribution of various items was announced periodically as well as which cards entitled to us to particular foods.

The days when we got butter were particularly appreciated. It was also great to get chocolate because sweets were rare. On the other hand vegetables and fruit were grown locally and were readily available.

We could and did exchange one food for another by bartering. I remember trading milk and getting rice instead. Of course as is always the case, you could obtain almost anything on the black market at exorbitant prices.

Despite that somewhat challenging bit of history, I have to say today’s situation is unprecedented. I’m 98 years-old and I don’t think I have ever used that word except as a synonym for unusual.

But what is happening now has really never been seen before in my lifetime. When have we ever been required to separate from friends at the very moment when an embrace or a hug is needed as never before?

And why, I wonder, has French President Emmanuel Macron decided it is time to reopen schools and other institutions on May 11th? I question the wisdom of this. It is hard to keep children from playing and touching each other and spreading the infection.

Still, the world is slowly restarting. In Austria and Denmark, schools and universities are reopening. Germany is slowly returning to normal. Italy is reopening its bookstores. In Spain, construction work restarts. In the USA, there are spotty reopenings and a lot of fear.

So we have two contradictory forces at work; the wish to return to normalcy as soon as possible and the high risk of spreading the infection. 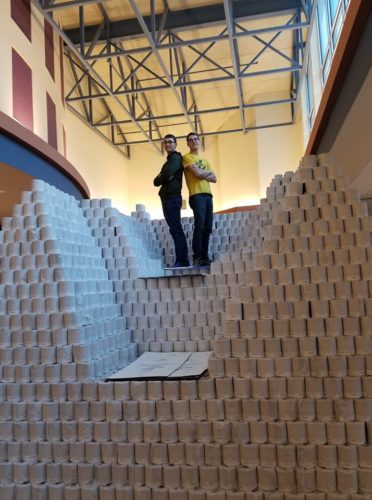 Midland Michigan, December 2019. The BlitzCreek Robotics team, as a money-maker, built the world’s largest toilet paper pyramid. (27,434 rolls). In January they sold the rolls and made a nice profit for their club. They should have waited a few months.

How long has the rationing in France lasted?

It lasted for many years and was still in effect when we left for the US.
In fact it was one of the reasons why we left.
I remember my amazement at seeing supermarkets
in New York overflowing with with food.

I did think that this pandemic is close to the experience of my parents of WWII ; I understand a little bit now what it was like

What an appropriate history lesson. Thank you, Simone. I actually have some of the food rationing coupons that my mother had. I believe she used them from 1941-45.

You are so correct in noting how unusual and difficult it is not to be able to comfort ourselves and our loved ones in person. There is no substitute for a hug.

So mostly during the war, not after the war. Thank you.

Dear Heo, I believe my mom’s ration coupons were for use during the war, not after.

Actually both during and after the war.It lasted for some time

Nice to learn how it was in Europe during and after the Second World War. There was a severe shortage of rice during the war in Korea, and I remember the words “ration” and “black market” used around the period after the war. The black market carried all sorts of GI Ration boxes, filled with such treats as canned meat, cheese, crackers and jam.