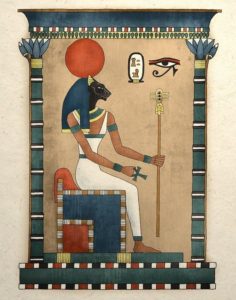 When I lived in Beirut in the 1930’s, I used to feed a stray cat who hung around outside our house. I would lower a container of leftovers to him from a kitchen window.

People’s relationship with cats goes back to antiquity. Cat images are found on walls of ancient caves as well as in stone carvings. In ancient Egypt and ancient Greece there was a cat goddess named Bastet and killing a cat carried an automatic death sentence. Cats helped control snakes, scorpions and other pests. By saving crops from mice and rats, cats protected humans from starvation and death. 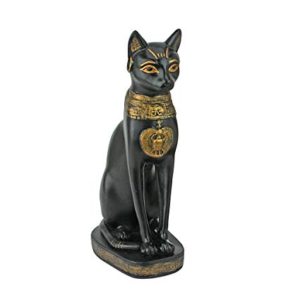 There are many beliefs about cats. They always land on their feet; they have nine lives. I recently learned that the superstition about a black cat crossing your path was because some believed such a cat was actually a witch.
But in Slavic folklore seeing a cat brings good luck because it drives away evil. Cats are considered “clean” in the Islamic world and permitted to live indoors with their owners.

Of course cats don’t consider themselves “owned” and prefer to think that associating with humans was their idea. Cats often think they have a better idea. For example, they won’t tolerate being washed, but very effectively lick themselves clean.

The place where cats lead the best lives is in Istanbul. They roam freely everywhere. It is said that there are 30,000 0f them being taken care of by people but not adopted. They are allowed to keep their independence and live as they please, wherever they prefer. They are protected but not imprisoned. 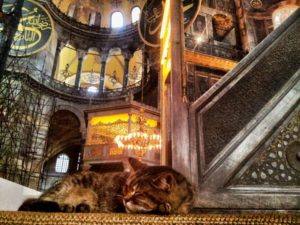 Cat at the Hagia Sophia in Istanbul

Writers are often depicted with their pet cats nearby, on chairs, bookshelves, or laptops. In return the cats get to figure in their writings, often as the main character as in T.S Eliot’s Old Possums’ book of Practical Cats featuring Macavity the monster of depravity, the Napoleon of Crime, who is also known as the Hidden Paw and is wide awake even as he is half asleep.

And let us not ignore Puss ‘n’ Boots and Dr.Seuss’s red and white cat who always wears a top hat. The Seuss books were conceived to make it easy for children to learn to read because they are written in verse and are simple to memorize. And finally I mention the mysterious Cheshire cat who lives with Alice in Wonderland and can appear and disappear at will.

I have read that cats only meow to humans because they have better ways to communicate with other felines (rubbing, tail flicking, growling).

Dogs are more devoted and obedient than cats but also more needy.

Famously cats are not amenable to herding.

I say hurray for Felis Catus. (or was that Felix?)

Editor’s note: We are breaking with past practice by providing a cat video below.

Have you seen the movie about cats in Istanbul: https://en.wikipedia.org/wiki/Kedi_(2016_film)

You might enjoy some of my posts of cats in Beirut — I sure enjoyed taking the pics. https://happening-here.blogspot.com/search?q=beirut+cats

Sorry if you blog is allergic to links.

I did see that movie . That is how I knew about the cats in Istanbul,
It was excellent.

I just saw your blog about cats in Beirut.
Nice pictures

Love Catmania & Video! I used to have a cat that liked to circle the bathtub, it was quite hilarious. He fell in every time.

Hi, Simone,
Thanks much for your ruminations on cats. I watched the video, & enjoyed it, but most of all I enjoyed your thoughts. I am forwarding this to my family in Minnesota, who adore cats.

Thanks Phyllis
I am glad you liked it.

I’ve always been a dog lover and didn’t have much interaction with cats until recently when I met Robin. She has six cats in her house! The first few times I visited her I have to admit I was very nervous with all the cats running around. They were very curious and cautious around me which was fine with me because I didn’t know what to do. After visiting several times, I started to feel more comfortable and they picked up on that and started coming to sit on my lap. I have to admit that now I enjoy being… Read more »

Here’s a great list of the word “cat” and “kitten” in a bunch of languages.
https://www.cat-world.com.au/cat-and-kitten-different-languages.html

I loved the video!! I have always been amazed at how cats evolved. With dogs, it is fairly obvious but cats essentially domesticated themselves. I wonder what the early days were really like

Great history about cats here. I especially love the part about cats not being owned, just associating with humans. I know my two cats feel that way!!

Love the references to cats in literature! I would add Crookshanks, Hermione’s cat from Harry Potter to the list as well as Cat from Breakfast at Tiffany’s as two other great ones.

Great article Simone! You did a very nice job on the history of cats. Even as a “dog person” I enjoyed it. Any plans to write about the history and experiences with “man’s best friend”? I know I’d love to learn about it!

I’m also a dog person and have read about their history. Did you know that it’s believed that the first wolf was domesticated around 27,000 to 40,000 years ago? It’s thought that wolves were attracted to human camps eating leftover food and began following them as they traveled.

Hilarious video! The cat falling off the window sill while sleeping is something I can very much relate to with my two cats. I just never have my phone ready to catch it on video!

Hi Simone,
That black cat statue above is beautiful. Do you know what it is or where it is from?

It is the goddess Bastet of ancient Egypt.

Thank you! I’ll have to look into that more. It really is stunning.

The ancient Egyptians considered cats to be holy animals and when they died, they were mummified and presented to the goddess Bastet as an offering. Their usefulness in killing vermin that ruined the crops was probably the reason they were so revered. Anyone having a cat will agree that their attitude shows they seem to remember their history.

Oh yes! Cats know their worth.

I simply love cats and I can’t explain why. They are such an amazing creature that anyone will like. in that they don’t stress me as dogs do, I prefer owning them to having dogs even though dogs are also lovely too.

Cats are indeed very special.There is something so
soothing about stroking one and feeling it vibrate.

It always surprises me that cats never land on their back. I usually thought it was one of those superstitions about cat but when I get to move closer to them, I realized that was absolutely true. They are such a wonderful creature. Clean and lovely. We need to have a world cat day, seriously!

Cats apparently are very supple and agile even when they fall.

Interesting read. But do they really have nine lives? I’m very much interested in knowing that because I have never had experience with one since I stay in the Islamic world where they live indoors with their owners. I’m not much of a cat person but I love what I hear people share about them. And that video you shared, I’m seriously laughing hard here. Had to show my colleagues so we could share a good laugh.

It is just a way of saying that they overcome obstacles and manage to stay alive.

wpDiscuz
28
0
Would love your thoughts, please comment.x
()
x
| Reply
You are going to send email to
Move Comment