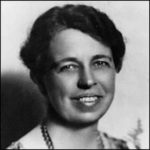 Eleanor Roosevelt is a definitional figure for me. Whenever I am asked about my political affiliation, I say that I am a Roosevelt Democrat and by that, I mean that I share Eleanor’s political beliefs, rather than FDR’s.

Eleanor Roosevelt held the position of First Lady for just over 12 years, the longest Presidential term in history. This allowed her to develop the role to its fullest extent. In addition, she had already been politically active as First Lady of New York State. 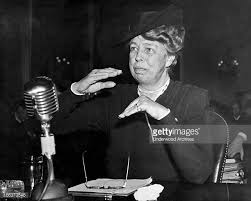 Because of the mobility limitations on Franklin Delano Roosevelt due to his paralysis, Eleanor had more space to act as his representative and data gatherer. She learned a great deal as she traveled throughout the country and the world.

Because FDR was also openly unfaithful to her, Eleanor felt more free to chart her own way. She espoused a progressive political agenda. The issues she championed were education, alleviating poverty, women’s rights, racial equality and even defense, economics and foreign affairs.

Thanks to her, Marian Anderson the renowned black opera singer, who had been refused access to Independence Hall by the DAR because of her race, was able to sing on the steps of the Lincoln Memorial on Easter Sunday, 1939 to an audience of 75,000. (video link to this historic performance is below)

Eleanor Roosevelt held 348 press conferences (Bess Truman never gave a single one) and insisted on including women reporters. From 1935 until 1962, she also wrote a syndicated newspaper column called “My Day”. This was published 6 days a week to an audience of over four million readers.

FDR named her a delegate to the United Nations and in this capacity, she helped draft the Universal Declaration of Human Rights. 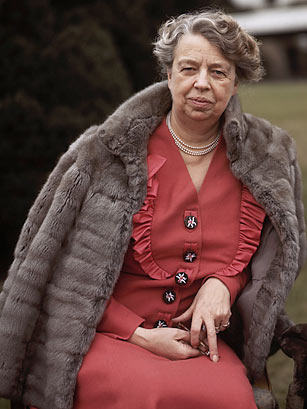 Had Eleanor been the president I feel sure she would never have turned back a ship of Jewish refugees who were sent back to Germany to perish in the extermination camps. She would probably also not have exiled Japanese Americans to internment camps where they languished for three years. 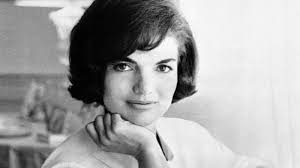 Jacqueline Kennedy, known as Jackie, piously declared that her priorities were raising her children and protecting their privacy, but she did far more. Jackie almost seems to have been created to redefine the role of First Lady.

In the pre-feminism days of the 1960’s, women were expected to be self-effacing but that wasn’t Jackie’s way. She was beautiful, glamorous and eminently decorative. She had a regal bearing which is apparent in her many photographs. She designed and sketched clothes and had a highly developed sense of style. She was also what the British call well-bred and well educated. She spoke and made speeches in French and Spanish. 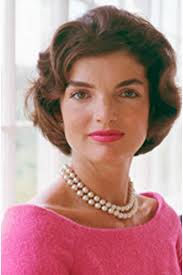 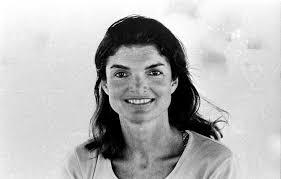 After the assassination of John F Kennedy, Jackie staged a funeral ceremony worthy of a Greek tragedy. Who can forget the tall figure of President Charles De Gaulle marching in the procession, the lone unsaddled horse and the children with their solemn faces?

Dear Simone:
While I don’t always agree with you, I think you were spot on with this blog about first ladies! You have identified two women, both of whom faced significant challenges in their relationships with their husbands, and yet made a very positive, major, and long-lived impact on our country, even the world, each in her own way, as you have noted.
Thank you for sharing your thoughts with all of us!
Take care,
Ray

Oh that video!! I had heard about that incident but never heard it before. How marvelous!

I agree, Eleanor is my favorite by a wide margin, although with much love to Michelle along the way. What a president she would’ve made, my god.

At it’s height, Eleanor Roosevelt’s syndicated column, My Day” appeared in 90 papers all over the US, with a reading audience of 4,034,552! Combined with the hundreds of press conferences she held I have to wonder where she found the time.

A great woman who doesn’t get the recognition she deserves