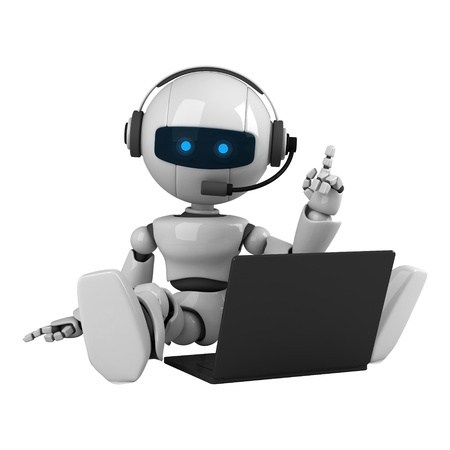 But we do have one remarkable trait which I think is unique to humans. Other animals use sounds and gestures. to communicate, but no other living being has ever invented symbols representing sounds, no other animal has organized those sounds into words and phrases to express thoughts and describe events.No other animal has invented writing and created a literature.

We should not give up this capability out of mental laziness and rely on primitive catch phrases to express ourselves.

But Google has a new idea about all that.

I recently noticed that my Gmail has taken it upon itself to offer me “one click” answers to my email. Has Big Brother arrived, and is he looking over my shoulder? Not quite. No human being is reading my mail. It is only an Artificial Intelligence Device, a sort of Mr. Robot who has been programmed to (timidly ) propose a choice of three bland replies like

1.How interesting!
2.Thanks for letting me know.
3.I did not know that.

Robot Man does not presume to reply himself but is giving me a chance to pick the reply I like best. I can see the usefulness of such features in business situations. Pre-built phrases or types of responses for often asked questions are a useful shortcut. When people are away from their desks or on vacation they can leave prepared set responses to routine queries.

But today I am more interested in personal email interchanges between friends and regular correspondents. In such situations, if the question is a simple one (How are you feeling? or Are you back at work?) you don’t need the help of Mr. Robot to respond. Even if he suggests what I would have said, it feels rather creepy.

And if it is a complicated response, you definitely want to do your own answering. Devices like “Smart Reply” have been made human-sounding and on-topic, but how will they deal with “What is your opinion of this film?” “What do you think of the latest book? ” There are just no pre- set answers to such questions.

I do love the way Mr. Robot takes all the spam out of my inbox, but for replying to personal emails, I think I’ll handle that myself.

•Thank You. I will.
•Very Interesting.
•Will Get Back to You Soon.

I have to admit, when Gmail first introduced the Smart Reply, I thought it was just another way to “dumb-down” our conversations. But now that it’s been around for a while, I’ve been using it for quick replies a number of times. Most of the times the replies are funny and sometimes just downright stupid, but it seems to be getting smarter as time goes on.

Did you know that when the “Smart Reply” was new, there were a few funny problems that had to be sorted out? For instance, the algorithm thought that the phrase “I Love You” was a good way to answer an email. Can you imagine responding to a request for a meeting by your boss with an email saying “I love you.” Not good!

Good. Machines are not replacing us yet!

Email has replaced the art of writing a letter. When was the last time you received a personal letter in the mail? Emails seem so impersonal compared to writing a letter to one person. Or posting something on Facebook that will be read by everyone. I remember sitting down and writing very personal things to someone and mailing it and then the anticipation of receiving a reply in the mail. Don’t get me wrong, I’m a regular user of emails. It’s a great way to quickly communicate and get an answer right away. But, I miss the days of personal… Read more »

Yes, but you can write long emails stoo. Still it is out there in the open and “real letters” are indeed better.

wpDiscuz
6
0
Would love your thoughts, please comment.x
()
x
| Reply
You are going to send email to
Move Comment