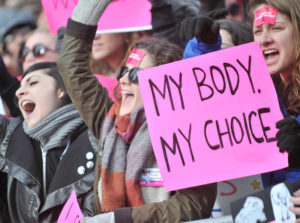 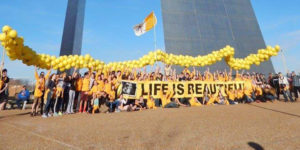 Over the last 30 years more than 25 countries have changed their laws to provide greater access to abortion.  Unrestricted abortion is now available in he United Sates, Canada  most European nations, China, South Africa , and Tunisia among others.

But in Latin America and the Caribbean 97% of women live in countries with restrictive abortion laws. The exceptions are Cuba, Guyana, Uruguay and Mexico City.

At the moment the great battleground and test  case for abortion rights is in Argentina. After the Chamber of Deputies recently approved an abortion rights bill, the Senate on August 8 voted it down 38 to 31.

The battle that preceded this vote centered on two opposing groups. “Ni una menos” (not one less) was formed in 2015 to raise awareness about violence against women. Green handkerchiefs are the symbol of their efforts.

Opposing them are the pro-life activists, whose support comes mostly from rural areas.  They succeeded in defeating the bill. They wear blue handkerchiefs and their slogan is

“Si a la vida” (yes to life).  This group has the support of the Church, which calls abortion the murder of a child.  Also in their favor is the fact that the Constitution bans abortion except for rape victims. In Argentina, abortion is considered both immoral and illegal.

In  Chile restrictive measures on abortion were also introduced this year, and a protest march by women  took place on July 25.

Pope Francis, who is Argentinian, was in Chile at the time and he compared having an abortion to avoid birth defects to the Nazi idea of trying to create a “pure” race.

Our Great Leader, not to be outdone, also plunged into action. He promptly decided to deny funds to family planning clinics that provided abortions.

Banning abortions does not make them go away and  an average of 200 women die each year because of botched illegal ones. The victims of unsafe abortions are the poorest and most marginalized women. They fall victim to unscrupulous and dangerous quacks.

I believe that abortion should be allowed but used as a solution of last resort. Every living organism has a built-in urge to continue living and we are deluding ourselves when we affirm that killing a “pest” or slaughtering a cow or a pig is OK and that the “sanctity of life” applies only to humans. It is also true that aborting a fetus can have emotional consequences such as feelings of guilt and depression.

And so I agree with those who say that abortions should be legal, safe, and rare. Having the possibility of abortion available in case of need should be like having a fire escape in your building. You hope not to use it, but your life is more secure because it is there.

Firoze, you say “an act committed by two consenting adults” but what about in the case of rape? In that case shouldn’t a woman be allowed to end a unwanted pregnancy? Or do you think the rights of the unborn child override the rights of the woman?
Also, what is your plan to “take away the ability to procreate from irresponsible people”? Are you suggesting that the government sterilize the irresponsible? Who would determine this? I don’t think you’ve thought this through.

Hi Simone. This article has been so interesting for me. I am from Argentina and I always read you. The debate has been intense over here, and there have been some quite interesting expositions in the Senate on the issue. We have learned a lot. I hope someday it will be legal, basically because, in my view, motherhood is not something that can be forced upon any human being. Of course I agree with you, it is always the least desirable option and must be avoided as possibly possible. Warm regards from Buenos Aires. Delfina.

Hola Simone, It is a shame that in the US every year some 200 women die because of botched illegal abortions! Since I was in my early years in university I have been a vegetarian.Only since 2009 I eat fish sometimes(once a week,or longer period). I believe in the ‘Sanctity of life’. Abortions should be legal,safe and rare! Kind regards, Robert Nicolaas

I love how your remind me that politics are happening everywhere! It is easy for me to get myopic about everything just being about the USA.

There are movements and protests and progress and setbacks across the globe. When I want to go to my happy place, I read about the prime minister of New Zealand, what an awesome woman and what a country that elected her.

It is surely HUMAN WRONG!

Abortion is like Nazi genocide for unwanted little people. NWO has used the mothers’ wombs as the new gas chambers for the unwanted race, the unborn race. And they cover it with sheep clothes as free choice or human right.

These women are fighting for their choice, but who will fight for the voiceless mercilessly killed little children?

Thank you for a sensitive and intelligent essay on abortion. Indeed, it was well done, Simone.

I wonder how many anti-choice advocates would feel different if their daughter or sister had to have an illegal abortion and severely suffered or died from it. I think things would look different for them if it just wasn’t an issue but a serious actual fact of life. I’ve had people follow me when they see my pro-choice bumper sticker and confront me when I park. They try to talk me into their way of seeing the issue, but when I tell them that I have a sister that almost died from an illegal abortion, they don’t know what to… Read more »

The abortion debate is a continuing issue that will never end. I’m a firm believer that every woman should have the right to make decisions about her body. I think that claiming the fetus has rights is a ridiculous excuse. If that’s the case then where are these people when they are needed to adopt all of the unwanted children in the world? It’s easy to make that claim as long as it doesn’t affect you.

As you say, this is a debate that will continue indefinitely, and yes women should decide because it is their body and their life that are at stake.

I am speechless, to say the least. This abortion debate should just be personal in the sense that you can go ahead and do what you want without influencing the person next to you. But left for me, let’s not encourage abortion and see how the act resulting in it can be controlled.

So, even with all the free condoms shared, looks like we still have the need to get rid of ‘unwanted’ babies! But who made them unwanted in the first place? I mean, we won’t arrive at this point if people used their senses better. It’s understandable when it’s a rape but why in a legitimate relationship and you still say it was a mistake and now you want the baby out? Come on! We are too knowledgeable for that!

I’m all for pro-life. Give the baby a chance. We won’t all be here if our parents saw us as unwanted and went to a quack to have us removed. Think of that as a part of you growing inside and a little soul wanting to meet you in person. If you can’t take care of them when they come, I bet there are homes that will gladly take them in.

Well, I’m with the Pope and Argentina on this. We can’t legalize something that is painful to both the person, the baby and the ‘doctor’ removing it. You’ll still likely be with guilt for a long time so why put yourself through that? And think of the crime you are causing the doctor to commit. Not to mention those who would likely cover up for you. You are dragging a lot of people into a mess, so why not deal with what you found yourself in?

And so I ask, must rape victims abort the child? Is there no such thing as keeping them and making them yours? Obviously they are part of you. Or are you scared they may turn out to be like their supposed father? I think not. Cause I have a friend who was raped when we were very young and her father didn’t let her abort. The baby grew to be a very healthy one and we were all there to support. Guess where he is now, the vice president of a multi-million dollar company at a young age. He’s putting… Read more »