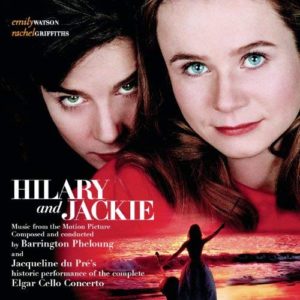 Hillary and Jackie is a 1998 film about the two British sisters Jacqueline and Hilary du Pre, one a cellist, the other a flutist. The film pretty much mirrors their actual lives.

Jackie became a virtuoso at an early age and rose to international prominence. Hilary struggled and eventually gave up performing to become a wife and mother.

Jackie was sent to Zermat, Switzerland as a teenager to attend a master class with Pablo Casals who called her a genius. She traveled extensively and in the sixties after returning from a Moscow concert she met Daniel Barenboim. (see previous blog) They recorded and made documentaries together.

Jackie and Daniel complemented each other very well. Both had been child prodigies and virtuoso performers. Their greatest joy was to play together. In 1967 they were married. She converted to Judaism and went to Israel with Barenboim where she met Itzhak Perlman, Zubin Mehta and Pinkhas Zuckermann.

Barenboim said of her: ” Music was not a profession for her. It was a way of life”. The couple has been compared to another famous classical music duo, Robert and Clara Schumann. 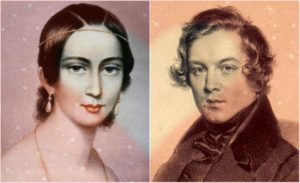 Here’s an excellent quality video of Jackie playing the first movement of Elgar’s Cello Concerto with Barenboim conducting the London Philharmonic in 1967. Well worth a listen.

Then two years after their marriage, Jackie was beset with physical symptoms and in 1973, she was diagnosed with multiple sclerosis.

She tried to go on playing, but her body turned against her. Jackie lived for fourteen years after she stopped playing and died in 1987 at age 42.

Jackie said of herself: “In a sense I was lucky. Because the cello repertoire is small I had done most of what I loved and I can look back on a full musical life”.

During the last two years of Jackie’s life Barenboim moved to Paris to become director of the Orchestre de Paris and started an affair with Elena Bashkirova who eventually became his second wife. 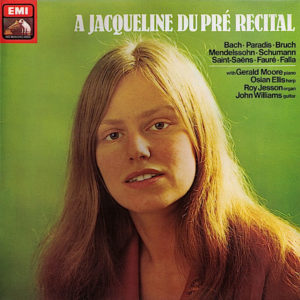 How young and handsome Barenboim was in the Elgar clip. Thanks for bringing back the music and memories of Hillary Du pre. Years ago, KQED showed a recording of them playing with Itzhak and Pinkhas at their London home. Wish they show it again!

I wasn’t familiar with this film and now that you’ve brought it to my attention I plan to watch it soon. It sounds like a very Thanks for posting this and the video of Jackie playing. I’m also planning to read the book A Genius in the Family.

I think that Emily Watson and Rachel Griffiths both gave outstanding performances in this movie. I was fortunate enough to have seen it when it came out in 1998 and now have it on DVD. For anyone not familiar with the true story it has a very sad ending that can be difficult to watch.

I watched the film when I was still very little. I remember sitting with my mum on her lap and she crying almost all through soaking my shirt and sniffing in my ear. Lol. The film is a very interesting one and I grew up with it implanted at the back of my mind. I will never forget the real people whose lives were represented. They are all very strong people especially Jackie who was willing to do all for music even after her diagnosis. We have more people like that today and these are all good sources of inspiration.… Read more »

I agree with what Barenboim said of her. Music was definitely more than a profession for Jackie. It was a way of life for her. I have seen a lot of her work and to say they are all beautiful is quite an understatement. She was really lucky to have a husband who can relate to her passion and they were able to do a lot together.

Yeah, famous classical music duo, Robert and Clara Schumann are another great motivation for me. My husband and I also share similar interests and hope to achieve a lot together in the future.

I agree. In places where religion still pervades everyday life, the concept of blasphemy is alive and well. A lot of countries today still takes this very seriously and attach serious punishment to people who they claimed are involved in ‘blasphemy’.