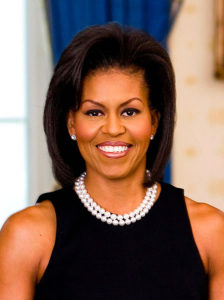 One has to be very versatile to combine all these roles and Michelle Obama certainly was. Confident, comfortable in who she was, normal and beyond….a beautiful combination of family and political life.

She said: I wake up every morning in a house that was built by slaves. This was said without bitterness but with a sort of amazement at the road she had traveled.

Michelle Obama too was a reluctant First Lady. In fact this is almost a prerequisite for a job which involves living in a Historic House with no defined role.  From the start she was aware of the limitations it would impose on her family. They could no longer step outside unaccompanied, open windows, come and go as they pleased. 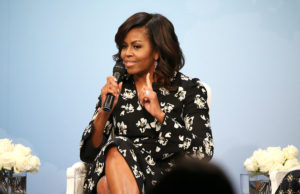 In time Michelle developed her own activities.  She campaigned for a healthy life style which involved exercise and good eating habits and planted an organic vegetable garden on the grounds of the White House. She became an advocate for Veterans and military families as well.

Michelle was also a very effective public speaker. She campaigned with and for her husband and one felt that no one was writing her speeches for her. She spoke simply and honestly with sincere feeling. Like Jackie Kennedy, Michelle had a flair for clothes, knew what to wear for any occasion and became a style icon.

Gloria Steinem said of her: She has lived a public life without sacrificing her privacy and authenticity. Michelle was the first in her family to go to college and then became a lawyer. She was also a community organizer and met Barrack Obama when he was similarly engaged. In fact at that time she was his mentor at their law firm. 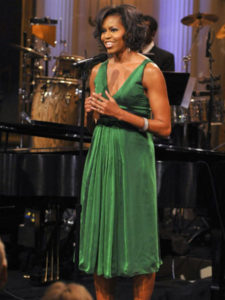 Both literally and figuratively, Michelle Obama cultivated her garden. 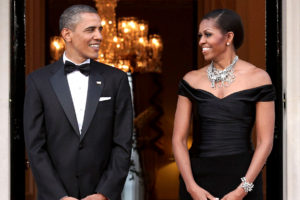 “I enjoyed reading your blog on Mrs.Obama which I forwarded to my African American friend.”

Michelle Obama was an amazing First Lady! She was a role model for women and her efforts to improve the lives of young children are historic. We should be so lucky to have another First Lady like her to make her mark in history.

What a contrast to the present ignorant occupant of the
White House who does not even live in the White House.