Have parents really been listening to the nursery rhymes they read to their children at bedtime? Do they truly want them to hear that after Jack and Jill climbed up the famous hill, that Jack sustained a head injury while Jill was left careening down the hill behind him? 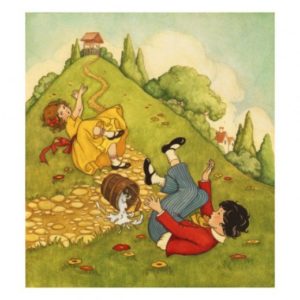 How about the maid in the garden minding her own business and hanging the clothes to dry when a blackbird snaps off her nose? And what about those poor people who are walking on London Bridge when it falls down? 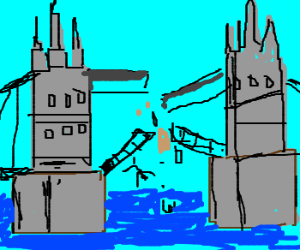 And what would they make of the spousal abuse when Peter the Pumpkin Eater imprisons his wife in a pumpkin shell? Consider also the me-too implications of Georgie Porgy who kisses the girls and makes them cry. And can we talk about religious vengeance when Goosey Gander throws an old man down the stairs for not saying his prayers. 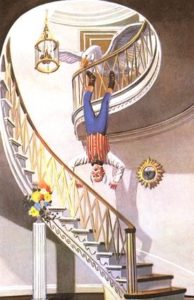 The goose is loose.

And we’re happily relaxing with Rockabye Baby until the disastrous breaking of a tree limb sends baby and cradle crashing to earth. How can anyone go to sleep peacefully knowing that disaster awaits?

How about the overcrowded conditions and corporal punishment visited on the children of the “old” (ageist) woman who lived in a shoe? She apparently had more kids than she could handle and I would not want to be one of them. 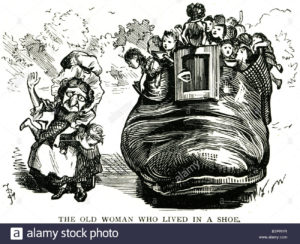 Not a happy place for the kids.

The Mother Goose rhymes were first published in 1697. Was the world more cruel then? Were people more used to violence, trickery and mayhem? Isn’t it scary and sinister when London Bridge falls down? These questions are whirling in my brain.

Could it be that from the safety and warmth of your own bed you can comfortably contemplate the misfortunes of others and rejoice that they are not happening to you? Maybe it is like sitting by the fireplace watching a raging storm from the window and feeling dry and contented.

Which brings me to the ultimate mystery writer, Agatha Christie. She saw these contradictions and used them in her tales of crime, murder and horror.

In Ten Little Indians, the characters are marooned and die one by one each day. (This also appeared under the title And Then There Were None.) We are wondering who is doing this to them. In One Two, Buckle My Shoe, she has the shoe buckle become an important clue. She also used Hickory, Dickory, Dock as a book title.

And of course in her books, the seemingly innocent ones often turn out to be the criminals.

For me, tales of wickedness are more fun to read than the lives of Saints. There is just not much to say about Goody Two Shoes or Pollyanna’s good deeds. Excessive virtue does not a good story make.

Editor’s Note:  We hope you’ll make a comment or ask a question. These comments make Simone happy and she responds to all of them. Thank you.

Hello Simone,
Did you know David Daube, a professor in the law school? He also wrote about nursery rhymes. I believe he wrote that Humpty Dumpty was about a catapult.
When would you like to go to lunch?
At this point I have every Thursday free,
but will probably have to go back to Texas
sometime soon.
Cheers,
Ingrid

First, I met “Mother Goose Rhymes” in Children’s Lit 1A class at UC Berkeley, Library School, taught by beloved Mrs. Durham. How delighted I was to read them with different illustrations: fantastical stories, rhythms and rhymes and with beautiful/ whimsical illustrations. My two daughters grew up with them.

I think you hit the nail on the head with the fact that the 1600s were a much more brutal time. Even the Brothers Grimm from the 1800s were much darker than people probably realize. It is a different time now and we have sanitized a lot of that for modern sensibilities.

Yes! As Billy Joel says, “the sinners are much more fun…”!

Beautifully written Simone! Do you have a favorite wicked fairy tale?

Here is a “nice” ending to Jack and Jill”:
Up Jack got
And home did trot
As fast as he could caper
To Old Dame Bob who patched his knob
With vinegar and brown paper

I love how Agatha Christie does this. It is one of may favorite parts about her writing. So subversive.

No wonder Andrew Dice Clay was easily able to make these dirty for his standup. They already were! 🙂

I’ve always been interested in the history of nursery rhymes and fairy tales. I think that nursery rhymes were used as a way for a mostly illiterate society to express its displeasure with those in power. At the time it was punishable by death to rebel or make fun of them so nursery rhymes were a way to pass on coded messages in the guise of children’s entertainment to the next generation. The catchy sing-song melodies helped people remember the stories. It’s interesting that they have lasted so long but the average person doesn’t know the story behind them.

Another example is Agatha Christie’s story The Crooked House. It was first published in 1949 and was made into a movie a few years ago. One account of the history of the poem is that it originates from British history in the period of King Charles (1600–1649).

Thank you for this information.

What a delightful post! I’ve looked up information about the nursery rhyme Jack and Jill and found more stanzas. I thought that I’d share them here on your wonderful website. Keep up the great work!

Up Jack got, and home did trot,
As fast as he could caper;
To old Dame Dob, who patched his nob
With vinegar and brown paper
Then Jill came in, and she did grin,
To see Jack’s paper plaster;
Her mother whipt her, across her knee,
For laughing at Jack’s disaster.

Yes, I remember that too.

Hahaha. Funny how these examples seem hilarious as I read them from your point of view. I guess our parents never saw any harm in the poem they were reading to us as the aim was to put us to sleep. I’ll keep this in mind when I start having my own kids.

Yes, I quite agree with Ringman22 on this. The nursery rhymes had a background and was used to pass messages across back then. They are just so deeply rooted today that we can even do away with them. Hopefully, it is not polluting anyone’s mind as a child. Funny how these rhymes stick to our subconscious and from time to time we just find ourselves humming them and nodding along. Lol.