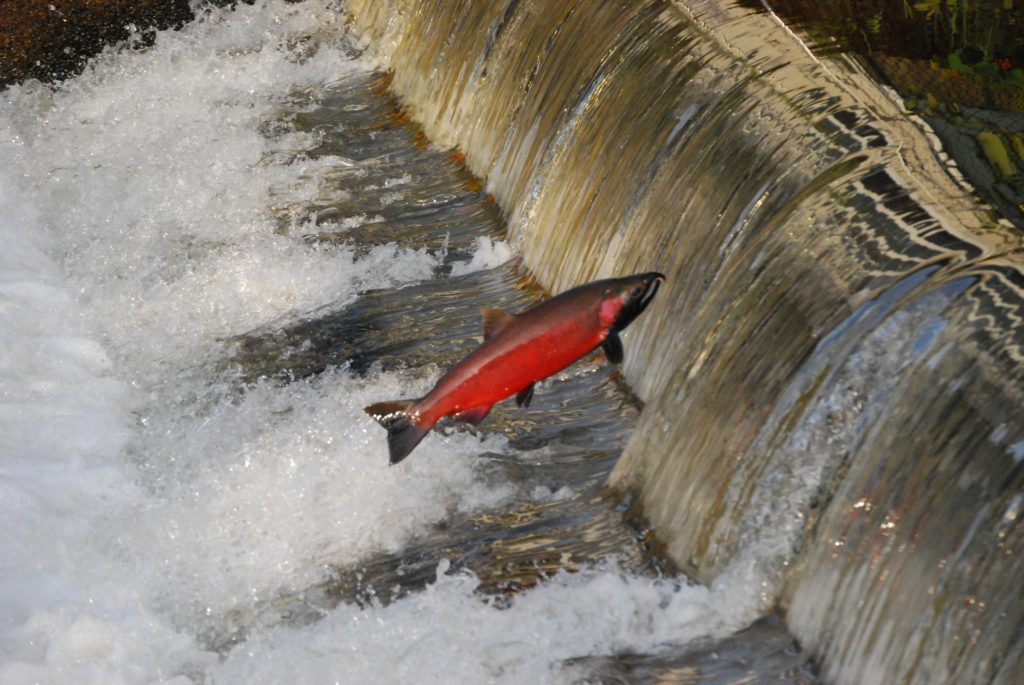 To think and act against the fashion of the day is the beginning of wisdom.

It is said that to get to the source you have to swim upstream.  Salmon swim that way to lay their eggs and to maximize their offspring’s chances of survival. Other fish too swim from the ocean to the stream where they wait for little insects to fly by.

Dead fish float downstream but it takes a live one to swim upstream.

Humans often make decisions not to settle for the obvious but to go counter to prevailing opinion. Often, this works out well.

I can think of three occasions where I had to make a choice between the beaten track or taking a different road. The first time was when my younger daughter was born premature and stayed at the hospital after I went home. At that time, the fashion was to bottle feed babies and that is what the staff did. They told me that because she was apart from me for a couple of weeks, I would not be able to breast-feed her. I ignored them.

I thought babies should be breast fed. After all cow’s milk was intended for calves, not humans. So I pumped my milk to keep it flowing and as soon as my daughter came home, we switched to breast feeding. My baby was happy and I was happy to live without sterilizing baby bottles. Swimming upstream gave me a good result.

My second little rebellion against convention happened when I discovered a book by Rudolf Flesch called Why Johnny Can’t Read. Flesch was critical of the way reading was taught in schools using he visual method instead of the phonetic one. Children were asked to memorize whole words instead of breaking them down into sounds. This method relied on memory instead of logic. Remembering each word by the way it looks is much more difficult and less efficient than recognizing the letter combinations that sounds are built with and then being able to do your own combining.

So, going counter to what was then current in schools, I used the techniques in the book to teach my younger daughter to read. By the time she entered kindergarten she was quite proficient at it. Her teacher was astounded when one day she drew a picture of butterflies and printed the word correctly at the top of her drawing. She pointed out to the teacher that words that end in “ly” have their plural in “lies.”

My third example occurred much later in my life. For 9 years around 1970, my husband David’s job took him to Africa to introduce the concepts of trade unions and credit unions to African workers in Senegal. At the time I was pursuing a career at the University of California Berkeley Library. I loved my job, I was good at it, and I was on track for a promotion.

The expectations of the day and of my husband’s employer were that I was to abandon my career because a  wife was supposed to follow her husband wherever he went.

I realized that I was not going to sacrifice my job, erasing all that I had achieved, and losing my retirement benefits as well. I remained  at my post.

Because we both had long vacations, we usually spent the month of August in Europe and I cobbled  together enough holiday and vacation days to spend Christmas time in Dakar, Senegal.

My moral…Sometimes, you just have to think for yourself.

You changed your life in such a positive way by thinking for yourself and making these good decisions. Impressive!!

You look so very spiffy in the new photo.
You have made right choices at each crossroads by thinking clearly. I am not only enjoying reading your blog but also benefitting from your wisdom.

You are a genius, Simone. All your posts are so simple and beautiful. This one is truly inspiring. I will always try to think for myself. Delfina.

Thank you for these interesting tidbits of your life! And I had no idea that reading used to be taught only by sight instead of phonics! It makes you question the beliefs of today´s experts, too…I wonder how people will look back 40 years from now, and say, that´s how they did things back then?!

I absolutely love that salmon swim up stream. It seems you have lived the same way never settling for simple.

Closely related to swimming against the current is the need to sometimes ignore medical advice. I can think of two examples from my lifetime when medical advice proved to be discredited. One was when all children, myself included, had their tonsils removed. Today this is no longer standard practice. The other is when the medical profession told people to drink 10-12 glasses of water per day. I thought this was ridiculous and felt sorry for all the people I saw carrying their water bottles around. Later the medical community admitted that this was too much and could actually be harmful,… Read more »

I loved this article Simone, it is very inspirational

Hi Simone, I too have found that taking a path different than what society lays out tends to lead to positive results. I related especially to the story about your husband moving to Africa.

Out of all 3 of these experiences, which one do you feel has had the most profound impact on the way your life has played out?

The reason the third experience was the most the most important is that it involved serious changes in living arrangements and , giving each other space to develop , achieving our respective goals and a the same time preserving the relationship from deteriorating

If more people would think for themselves and do what they thought was right instead of following the crowd, everyone would be better off. Too often people are afraid to stand out and say what’s on their mind and instead prefer to just go along with the accepted opinion. I think that’s why the US government is in its current situation. It’s time for the silent majority to step up to the plate and make itself heard in the upcoming election.

I agree, Wooster334. I think that schools are teaching children to not have original thoughts so it’s easier for the teachers to keep everyone in line. Instead, they should be working hard on making sure the kids use their imagination and push for creative thinking. It’s been that way for years and will continue. The only hope is that public schools are replaced by home schooling and the parents are educated enough to make a difference.

Just going to school is not enough. We have all seen pictures
of kids “learning” by rote by just parroting what the teacher is chanting.

When I was in first grade we read the Dick and Jane books that were based on a look-say method of reading. When Flesch came out with his phonics method in “Why Johnny Can’t Read” in 1955 he was ridiculed for saying that phonics was essential to teach children to read. It’s hard to believe that there are still those that don’t agree with the phonics method of reading.

Good for you for deciding to go against the hospital’s advice to not breast feed. I’ve had the same experience and never regretted it. It’s been proven that breastfed babies are often healthier, absorb milk better, and tend to have less digestive trouble than babies who are primarily fed formula.

I thought so too.

Wow. The instance of breast-feeding your daughter against all advice is a very good one. I’m motivated by it. My mum breastfed us all and we grew very healthy. But today, people no longer look that direction. I’m expecting a baby soon and not sure which to stick to. However, your comment about cow milk for calves is enough to point me in the direction I need. Thanks for this insightful post. I think it’s totally okay to swim again the current.

There are no good reasons why a woman should not breast feed unless she has medical problems
or an actual dislike of doing so.

OMG! You could do that with your husband? Gosh, I really wish I’ve got the heart to tell him I’m not going with him to his new construction state. He got a new project and he’ll have to spend 11 months there. He wants me to go with him simply because we are newly married. I don’t want to leave my job and life here to go stay a few months only to come back and start all over. I’m going to draw motivation from this and tell him what I think. Hopefully, he will understand my frustration with the… Read more »

What is the point of gender equality if a woman has to give up her job and position to follow a man?

I agree that to think and act against the fashion of the day is the beginning of wisdom. Only dead fish float downstream no doubt. I’m all for thinking for yourself and doing what you know is right and even better for you not minding if others are going against it. You are really a good source of inspiration.

What would be the point of the women’s movement if
wives’ travel was subordinate to that of their husbands?