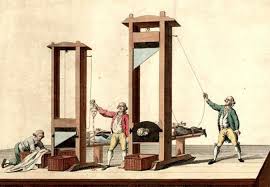 Editors note: This comment came in by email so I am reposting here. Your recent blog, “death penalty, a cruel and unusual punishment”, brought to mind another cruel and unusual punishment, lynching. What brought it to mind was a 60 Minute segment I recently watched dealing with the Alabama memorial dedicated to the 4000 victims of lynching here in the US. I read that one of the last such lynching occurred in 1981. However, they still seemed to have occurred after that, but in a more secretive manner, with fewer people attending. Of course, such killings were illegal. There was… Read more »

I agree entirely…any error that leads an innocent person to be killed makes the death penalty too much. Life in prison may be bad for the innocent person, but at least it allows for the potential of release and fixing the problem (as we’ve tragically seen with some people exonerated after only 20, 30, 40 years) but still, better that then never!

I don’t understand the bloodlust some people have for the issue. If capital punishment was an effective “deterrent” then why do we still have it? Surely by now it should’ve worked and deterred everyone?

I”ve read the pros & cons about whether the death penalty deters crimes and I don’t think there is a definite answer. On one hand, as stated by the American Civil Liberties Union (ACLU), “murder is committed in the heat of passion, under the influence of alcohol or drugs, or due to mental illness, giving little or no thought to the possible consequences of their acts.” On the other hand Paul H. Rubin, PhD, Professor of Economics at Emory University states, “almost all modern studies and all the refereed studies find a significant deterrent effect of capital punishment.” In my… Read more »

When a family member or loved one is brutally murdered as a random act by a unrepentant criminal, I think you would feel different about capital punishment. Why should someone that commits such an unimaginable crime be allowed to spend his life being taken care of by our tax dollars? Maybe it’s not a deterrent, but shouldn’t the grieving be allowed some vengeance?

I totally agree with you. But in some cases, the accused is innocent and if he has been executed, it is too late to make amends.

The last statement is something to ponder on. Animals are given the luxury of painless deaths but we seem to derive joy in watching our fellow human beings wail in agony over a slow and painful death for a crime he may or may not have committed.

I agree that they should be given time to feel remorseful and set things right before given the option to be killed painfully. Yes, they committed the crime, but we can still allow them rethink their life and see what they have done. A good number of them would definitely repent as they already know what awaits them.