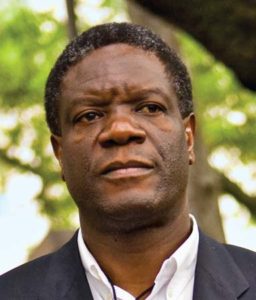 His name is Denis Mukwege. He is a doctor at Panzi Hospital which he created in Bukavu in the Eastern Congo (formerly Zaire) near the border with Burundi. This beautiful region, (parts look like Switzerland and parts like the Caribbean), is being ravaged by more than 20 years of ethnic conflict, tribal wars between rival groups of thugs’ intent on plundering Congo’s vast riches. 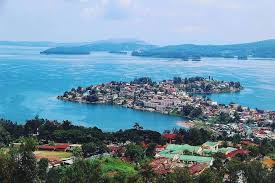 Mukwege’s father was a pastor and, as a child, he used to accompany him on his visits to the sick and wounded. He was struck by his father’s inability to help them except by praying with them and, encouraged by his mother, he decided to study medicine. In the first hospital where he practiced he came to work one morning and found that all the patients he worked so hard to treat had been murdered. He could not understand it. Why kill helpless people in their beds?

After his first experience of treating a woman who had been raped and savagely mutilated, he traveled to France to study gynecology and obstetrics. He soon realized the full extent of the ongoing violence. The destruction of women’s genitals was systematically used as a weapon of war. After he performed reconstructive surgery on the same woman for the third time he understood that more than surgery was needed to deal with such extreme cruelty and systematic violence.

The uncontrollable military groups were operating with impunity because the State did not intervene. In fact, there was no State It had been taken over . It was complicit. When there is no rule of law the law of the jungle prevails.

Those brave women got up again and again despite being raped by their own husbands, despite being rejected by their families for having dishonored them. Mukwege mobilized them, encouraged them to speak out, to support each other, to educate their sons and their husbands, and raised their spirits. “Be outraged! Say NO to violence,” he taught them,

Still because there was no support from any lawful authority, Mukwege himself was discouraged in a menacing way from speaking at the UN General Assembly, His life was in danger as well of that of his wife and children. Mukwege and his family went into exile in Europe.

Meanwhile, the women he was helping organized themselves, raised enough money by selling their crafts and sent him a ticket back to Africa. Thousands of women greeted him on his return. They called him The Messiah. He could have stayed in Europe, but he came back to continue his work. He now sleeps at the hospital, has a permanent guard that protects his every step and travels in a convoy of several vans. “The Man Who Repairs Women” (The Wrath of Hippocrates) is the title of the film he made of his experience. It was at first censored but has since been released. Denis Mukwege has received the Sakharov Prize from the European Parliament and the Nobel Peace Prize in 2018.
Panzi Hospital now treats more than 3500 women a year and Denis Mukwege performs more than ten operations a day.

We are often discouraged from judging people by their appearance but when I look at a picture of Denis Mukwege, I see the face of a man who cares.

(Editors note. Here is a link that will allow you to learn more about Mukwege’s work)

May people with this kind of courage, compassion and willingness, rise up all over the world. In this way, we can restore faith in the human species.

Thank you, as always, Simone, for your inspiring writing/reporting.

Wonderful title! It takes a
special kind of person
to return to a difficult home
country when he could
have a safe and comfortable
life elsewhere. Good choice
by Nobel.
Ingrid

The world needs more men like Denis Mukwege. His work with reconstructive surgery to repair the damage done to women who have been raped is awe inspiring. He greatly deserves the Nobel prize and the numerous other awards that he’s received.

I’ve read Dennis’s story and to say it’s inspiring is an understatement. I mean, who would comfortably leave a safe haven only to come back to where your life and that of your family is threatened. He did not even mind sleeping at the hospital, and having people follow him around. He’s an icon and has greatly inspired and helped women of his place.

Oh wow. Is the film titled “The Man Who Repairs Women” or “The Wrath of Hippocrates”? I am very much interested in checking out the film he made of his experience. It’s normal for such to be first censored but no doubt it will still be released.

Yes that film would be very interesting.

Denis Mukwege is definitely a great source of inspiration to a lot of people. I was glad to hear that he received the Sakharov Prize from the European Parliament and the Nobel Peace Prize in 2018. This goes a long way to show that his work is not going unnoticed. It’s also a great thing that Panzi Hospital now treats more than 3500 women a year and Denis Mukwege performs more than ten operations a day. It goes a long way to show that good progress is being made

Oh my! How can the destruction of women’s genitals be systematically used as a weapon of war?! That’s so cruel! It’s heart-warming to know that someone is helping them and encouraging them to speak out. He’s really a good person and we sure need more of him.